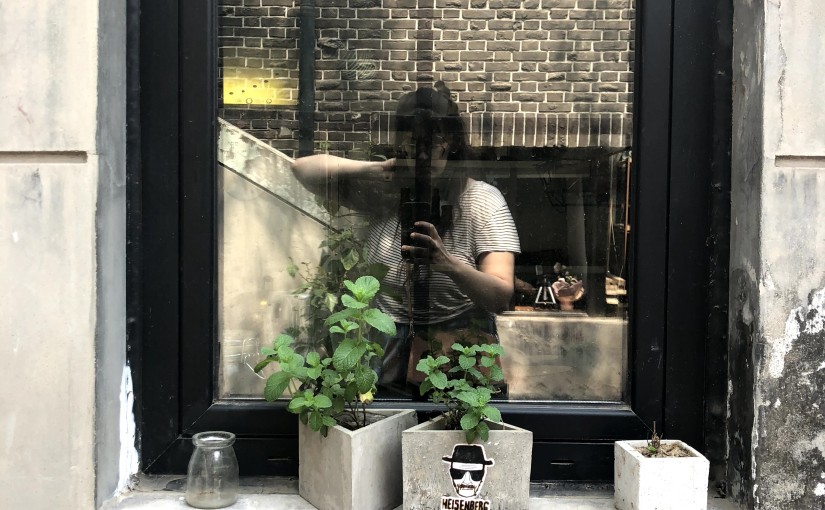 Didn’t I just do an April Photo dump? I know it was mainly about Seoul, but still. I’m actually leaving for Seoul AGAIN in less than five days. Time Flies.

May started with a weekend trip to Tianjin. Wandering streets that were vaguely European and staying in an expensive hotel, Tianjin became a city I want to visit again solely for feeling luxe.

Giant malls are still everywhere I go in China, but here they seemed to be even more of a date night or night life spot than the ones I have frequented in Beijing. Clothing store with dirt cheap tshirts, the same design on twenty different colors, and sizes that intimidate me enough to just stick to H&M for now. 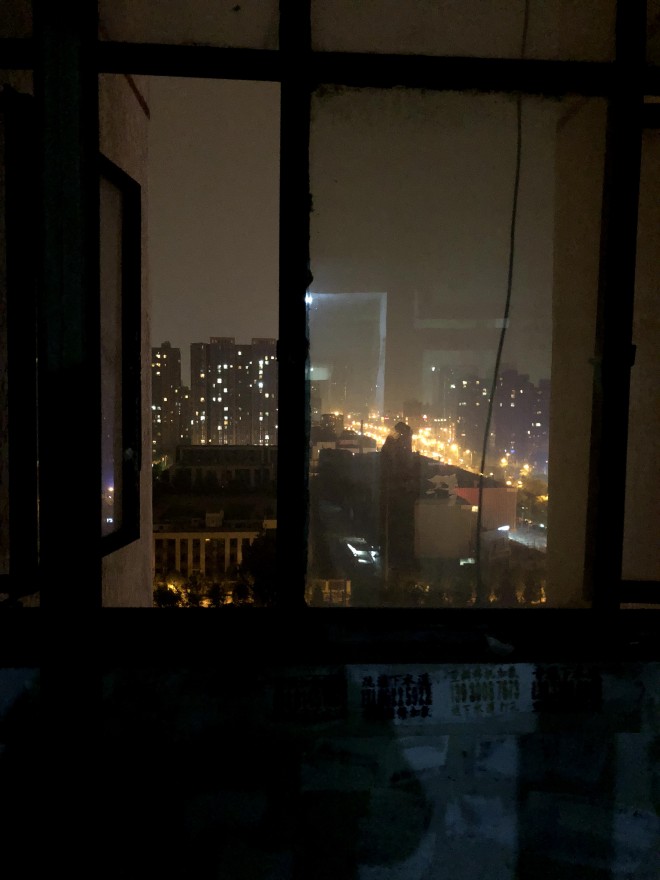 My apartment is on the bottom floor, and the windows are basically pointing toward other walls. My friends however, have a great view that reminds me that we live in a city. Maybe my bedroom in on the bottom floor, but it’s the bottom floor of a 25 floor building. While driving at night from one location to another I can’t help to do anything but look at the lights, the characters, the signs for things I can’t understand and feel happy.

The Beijing summer is starting, which means I want to be outside all the time in the warmth of the sun, but not the smog. I have started running outside when I have a mask on and there is a low pollution count. The park near my home is amazing, and I’m so thankful I have seen Beijing grow from a dirty cold winter landscape to a blossomed, lush, green landscape. I can’t wait to return to the big tourist spots now that everything is GREEN.

May was the only month I didn’t take a trip in. I have trips planned until NOVEMBER. Places in Asia, eastern Europe, a trip back home for a bit. So I hope I’ll be able to keep up with everything. As much as I love just travel blogging, I hope to just regular blog. Like maybe I’ll write about how the Beijing water ruined my hair and how I saved. Maybe something about how I had to adjust my cooking style in China and that I FINALLY can eat spicy food. 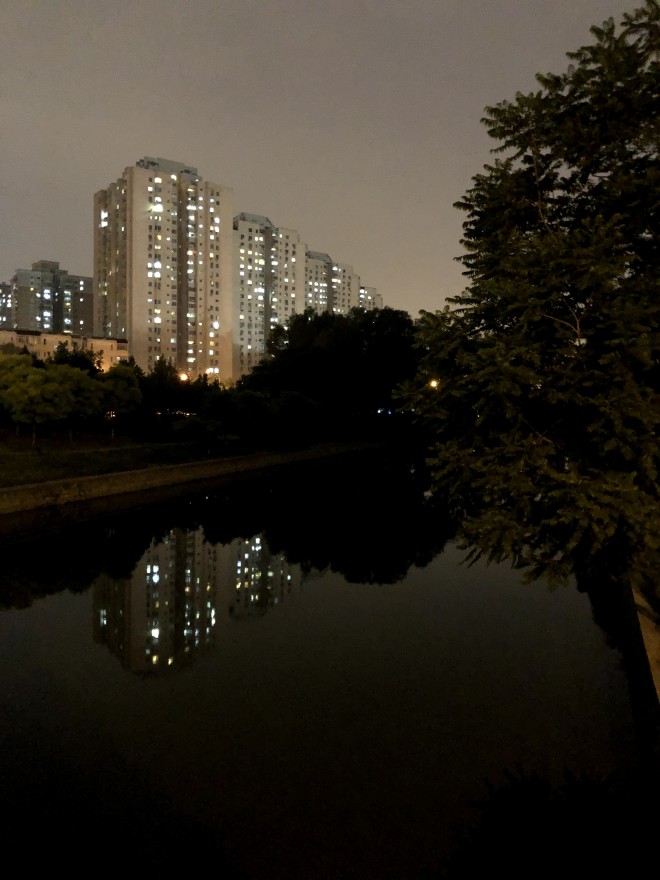 I made a super chatty post about Seoul and my feelings about traveling and moving for my photo dump this month. That made me want to give you a bit more of a “just facts” post about my seoul trip. Maybe you hate it, maybe you like the chatty versions! Either way this should help fill in the gaps if you felt like you missed all the information. 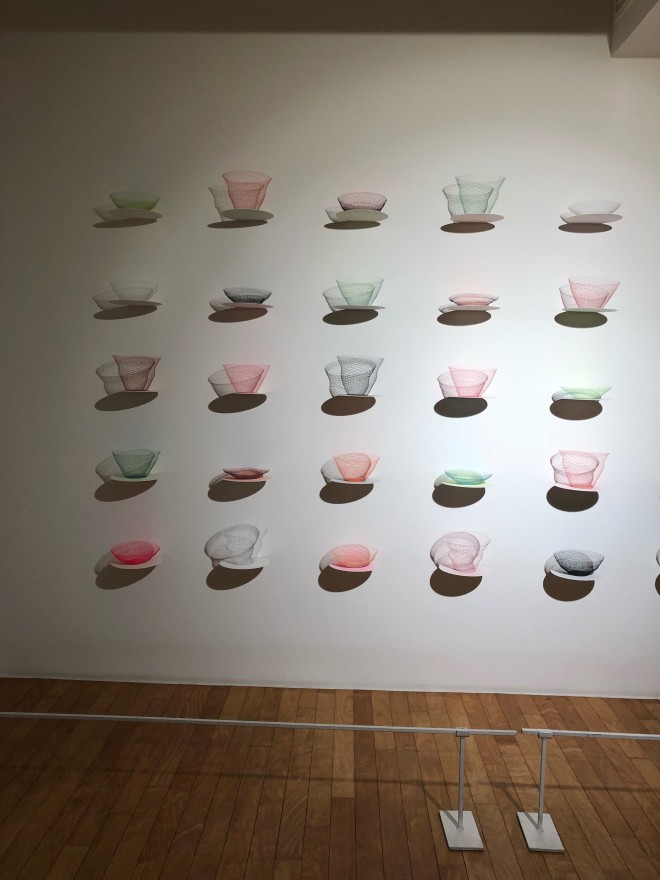 We totally did not find this dinner place. Instead we went to a Thai restaurant in the same area. It was right next to a sushi place, but man we made the BEST choice. It was delicious, the owner was wonderful. I felt really treated. 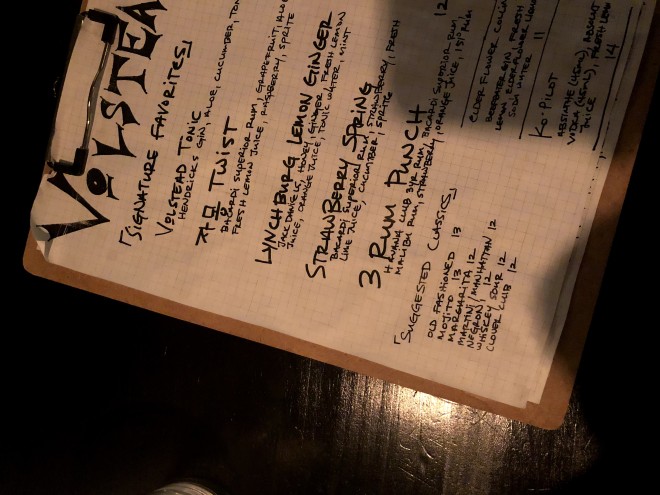 We DID find this one, it was amazing. You head down some stairs into a dimly lit room. the music alternated from Santana to Drake but the vibe still worked. A hand written menu, a sketchy portrait of Volstead on the wall, and some antique wall hangings made this bar feel less dive-y and more cozy.

Thursday was the only day I really planned. The other days I just picked out options for us to see what worked best. I didn’t know how easy it was to get around the city or how expensive it would be. It turned out to be very easy. When you arrive to Seoul, head to a 7eleven and ask for t-money cards. We put around 15000 on them, and they cost 4000. They lasted us the whole weekend, it was super convenient.

So next you will find a list of some places I found that I wanted to go, some I managed to get to but some I didn’t.

We went here because it was RIGHT across the street from our airbnb and MAN it was DELISH. I miss yogurt a ton so I had a granola yogurt bowl, and Johnny had this intense egg, bacon, arugula crepe situation. Obsessed.

We did eat at OTTO Kimbap and the area was amazing. We walked around, saw a few vintage stores, a record store. A lot of the stores opened later but it was still pretty cool. Caricakes, who is a youtuber, recommended this place once while walking around Itaewon. 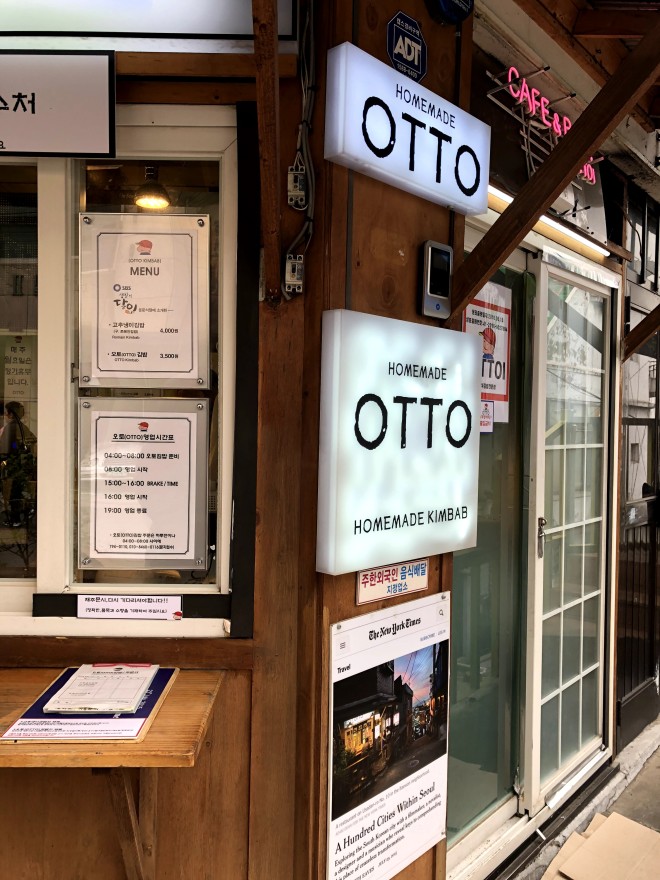 We went to this cafe, it was in Hongdae where we were doing some window shopping (turned into real shopping, oops). It was really cute. The cafe was a little busy so the sheep seemed really tired and overwhelmed but CUTE CUTE CUTE.

Have you ever heard a song and within the first few seconds, you know it was going to be one of your favs? That’s how I felt when I saw the adorable store front of Never Bored. Bright, silly yellow doodles, a giant giraffe, and plants hanging all over the place. This store screamed JOYFUL to me, and so I dragged Johnny in. The owner was so kind and helped us order in Chinese, I got milk tea and he bought a latte, “Wǒ yào nǎichá hé ná tiě.”

So some quick and practical reason why I will be returning here even though it’s not close to where I live: the tables are high enough that I can cross my legs under them comfortably, the drinks are so good and, honestly, affordable. Going out to coffee can be as expensive as going out to dinner here, so if I am going to spend 60 yuan on two coffees it is going to be GOOD. (By the way 60 yuan is like ten dollars.) The atmosphere is so cute, too. It’s definitely a cafe for chatting and hanging out. Some cafes seem like a quick bite and then leave type of place, and some are places you can sit on a laptop and never look anyone in the eye. This is the perfect middle. I can sit and work, but also not feel weird for talking out loud. 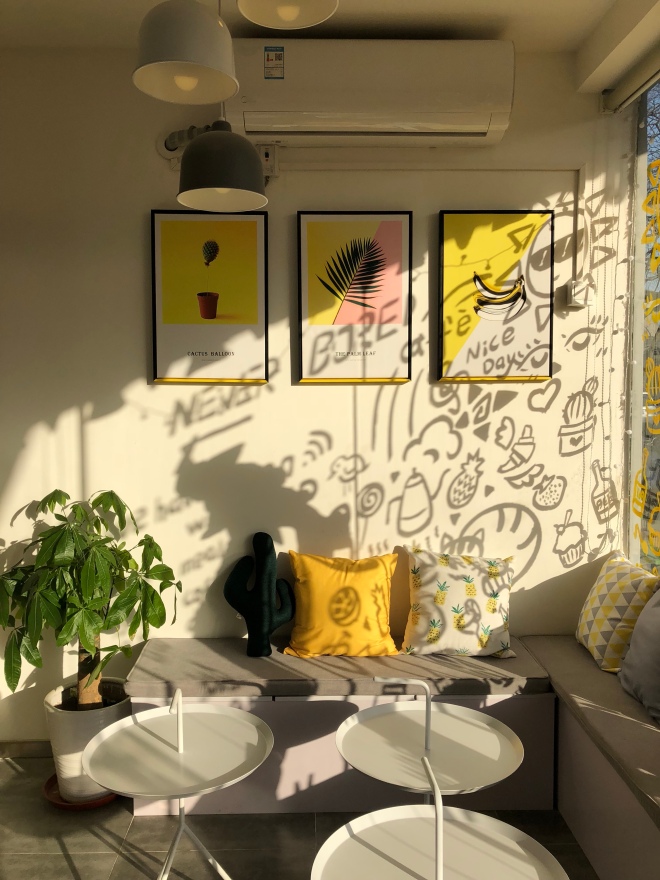 This cafe is pretty close to a hoppin street, which is fun for when you come to Beijing and want something hip. So go to Gulou street (a post about this will be coming soon), walk around and eat some street foods in the big crowds, then head over to Never Bored. I recommend the milk tea, it’s so good. The espresso there is also GREAT QUALITY. Third wave coffee seems like it is growing here, so hopefully we will find more and more cafes with great espresso. I know, here I am in one of the countries that know tea best, and I’m going to coffee shops. But guys, I can’t STOP! I love it. I have a list of other ones to go to, but Never Bored just fell into my lap. I had to write about it right away. If you have any recs, PLEASE let me know. I always love hearing from you! 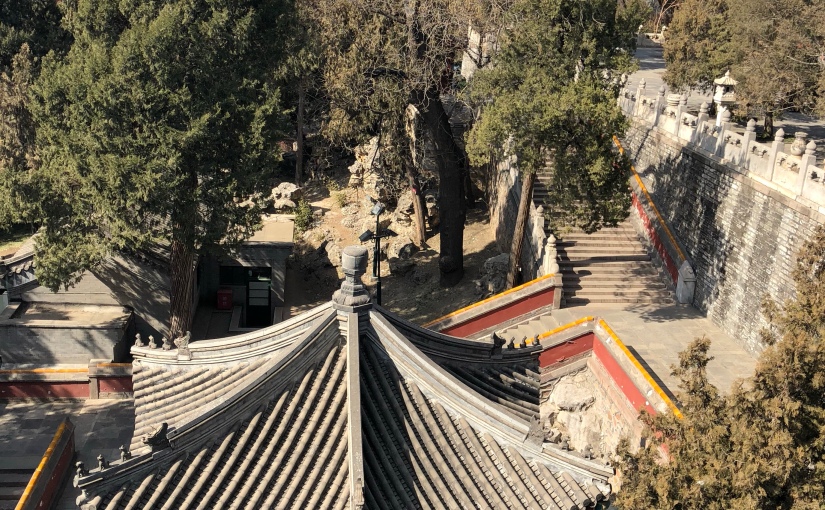 Okay, so my first week in Beijing is almost complete. I have a million thoughts going around my head, so we are going to start with a bit of a word vomit and move into a photo dump.

We arrived super late at night and went straight to the hostel. We are staying at The Red Lantern House, which is not only flipping adorable, but also in a great location. We are staying in a room with just the two of us, and for three nights it is 700 RMB which translates to about 104 USD. That is expensive for a hostel, BUT we are staying in like a private room. The other dorm rooms are a lot cheaper and just as nice.

Here is the hostel: 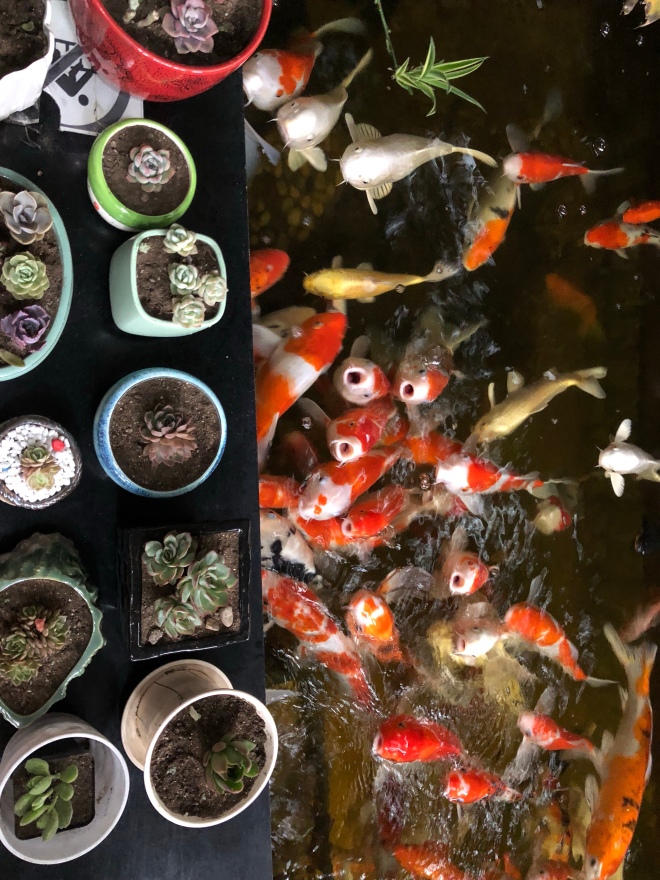 The next day, we ate a ton of great food, and also did some boring stuff. Let’s talk food first. So it’s true that in Asian cultures you get like a big plate of food and everyone shares it’s like (INSERT AMERICAN RESTAURANT THAT HAS SHARING PORTIONS HERE). In one breakfast, we had: dumplings, red bean oatmeal, noodles, cucumbers, and soy milk. Then for lunch we had this plate of chicken, some spinach, peanuts, a pepper dish, and a soup.

By the way, I’m not leaving these names out because I want to. I have no idea what this is called. But man it was SO GOOD. Then for dinner we had some other chicken thing, another soup, and more cucumbers. I am living my best food life. It actually just occurred to me yesterday that I have no idea when I last used a fork?

Anyway HERE IS THE FOOD: 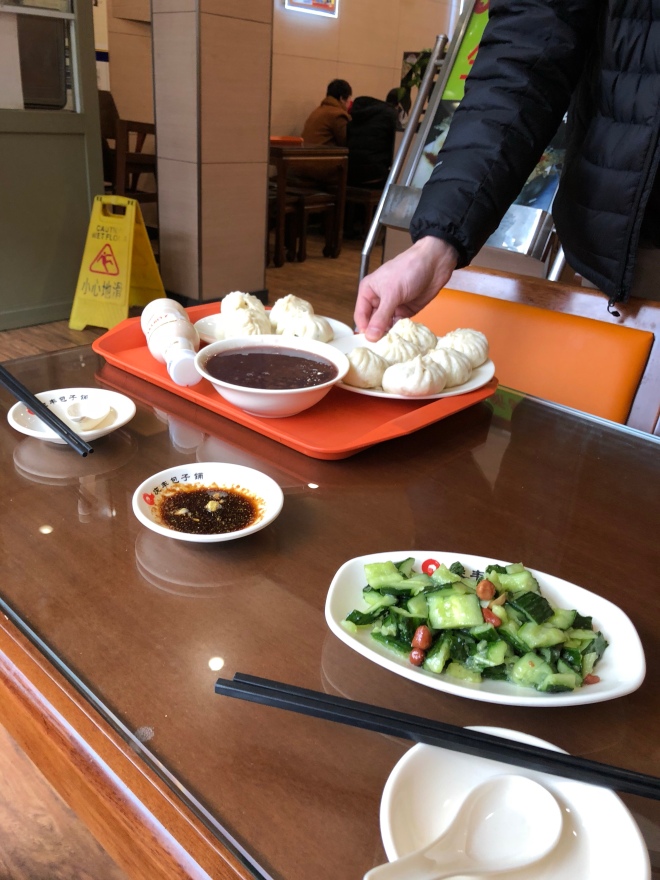 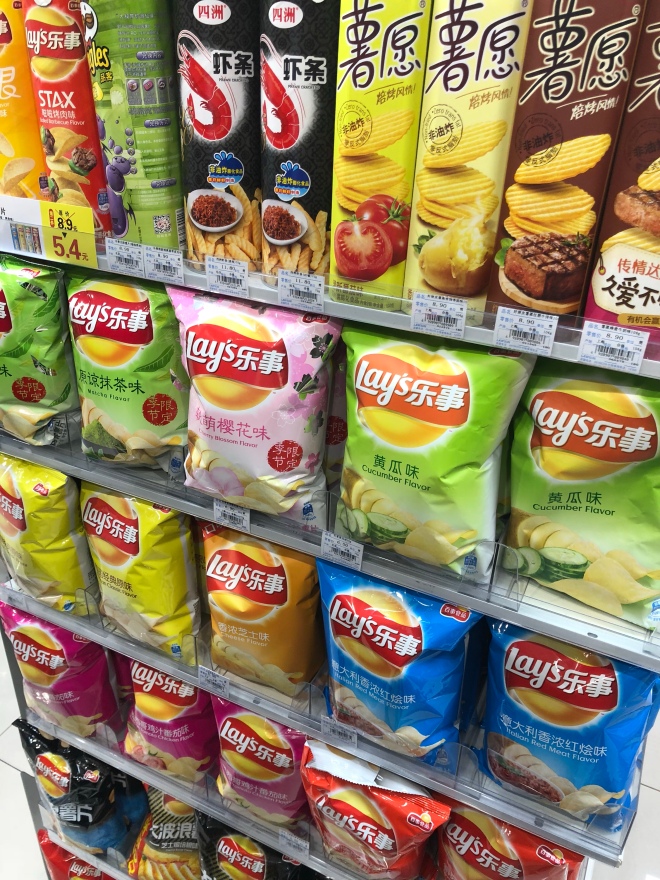 This second day we did mainly boring things like phones stuff and bank stuff. Which took foreverrrrrr, but it’s kind of like if I worked at a bank and someone with a Chinese name, address, passport, etc needed a bank account, I would have no clue how to do that, or put that into the English system we use! So it was a lot of patience on both ends. See above photo for some snacks we bought for our three hour stint at the bank.

The day after that we went on a few tours of the big places and they kind of speak for themselves. Like, these places are older than America. It’s pretty amazing learning about Chinese culture/history by being right next to it. So we went to The Forbidden City, the old Summer Palace, Beihai Park. For the Forbidden City we had a tour guide, and I really was happy to have him. If you don’t have a guide of some sort it’s kind of hard to understand WHY each detail is so important. 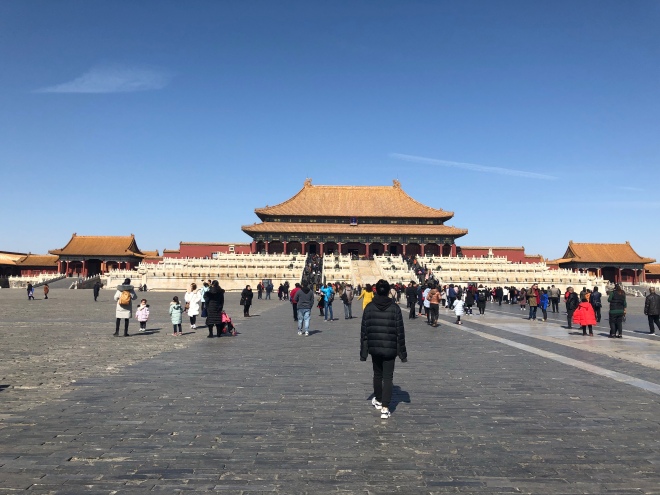 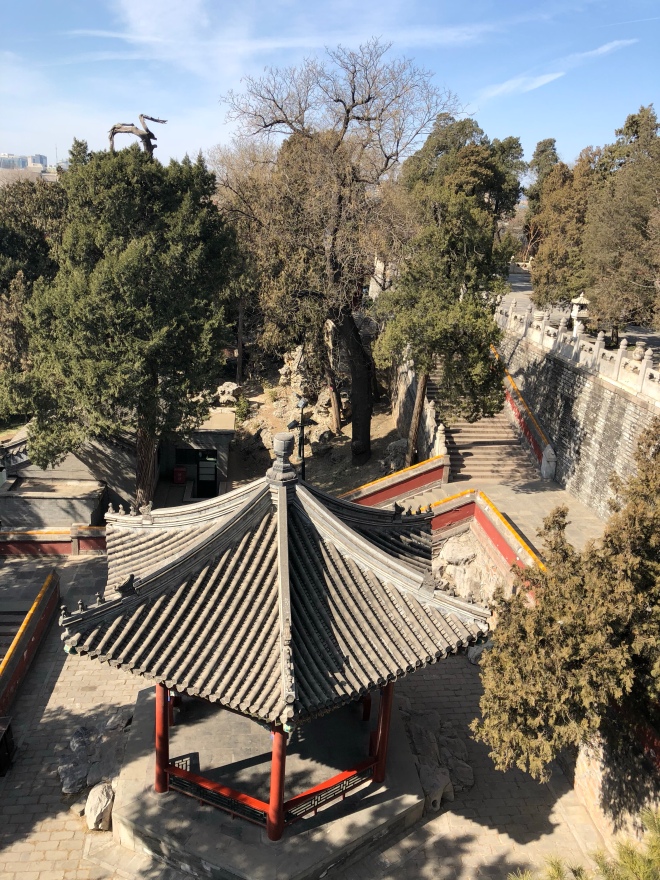 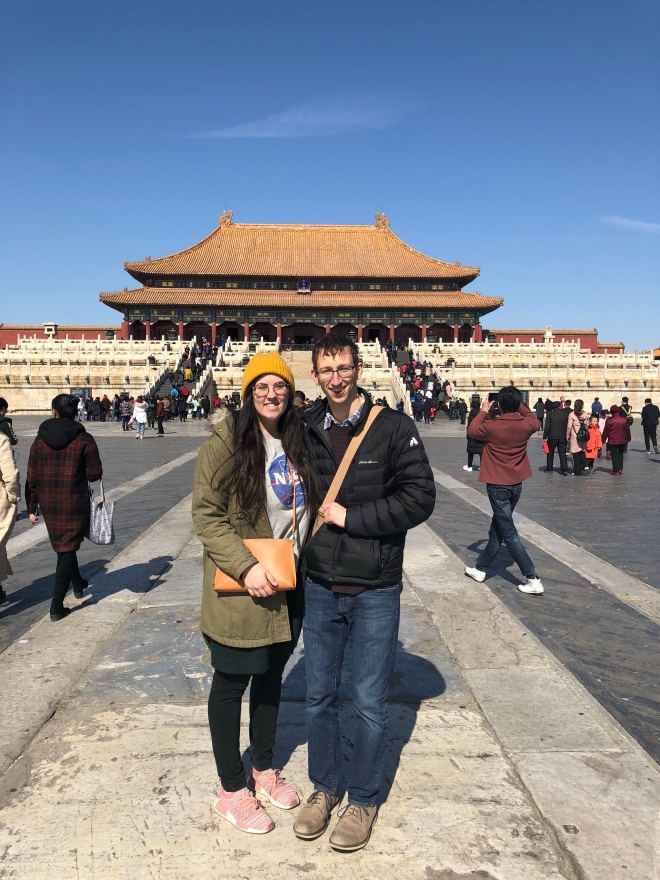 The thing we have done the most of while being here is walk. We have walked so dang much. There is no question about it. My calves, my feet, my thighs, they feel it. That’s probably why I’m baiduing massage places right now.

Some non-typical things we have done are go to a local brewery, eat jiānbǐng, take the metro confidently, go to a few coffee shops, and stroll through Gulou street. I’m really excited to experience the art district eventually, but that is near where we will be staying next, so we didn’t want to trek all the way over there to see something we will live by. 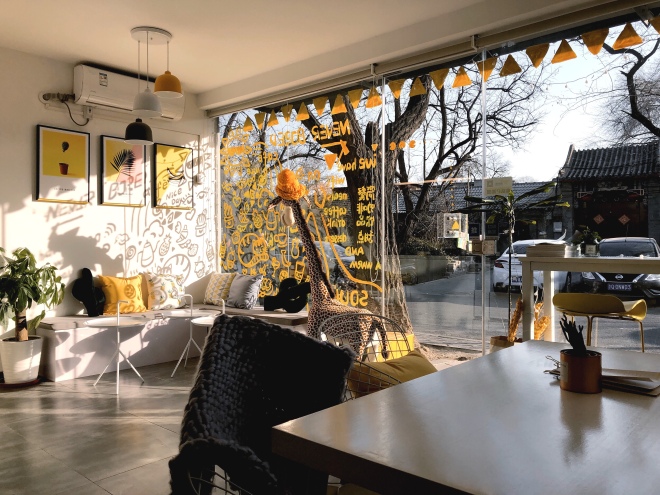 I’m going to include a vlog of our travel later and the first week here because I feel like that might help you guys see things better? I don’t know how to explain how interesting China is, and sometimes videos do more than photos, so that’s basically it. Let me know if you like the vlog, pleaseeee. I have no idea how to do one and this week was a really weird one so I tried to make it the best it could be!

Coming to China? Just Traveling in general? Book an Airbnb! Use this link to get 40 dollars off! CLICK ME.